The opinions expressed below are our own.  We received no compensation for the review.
Click on a picture to get larger views. 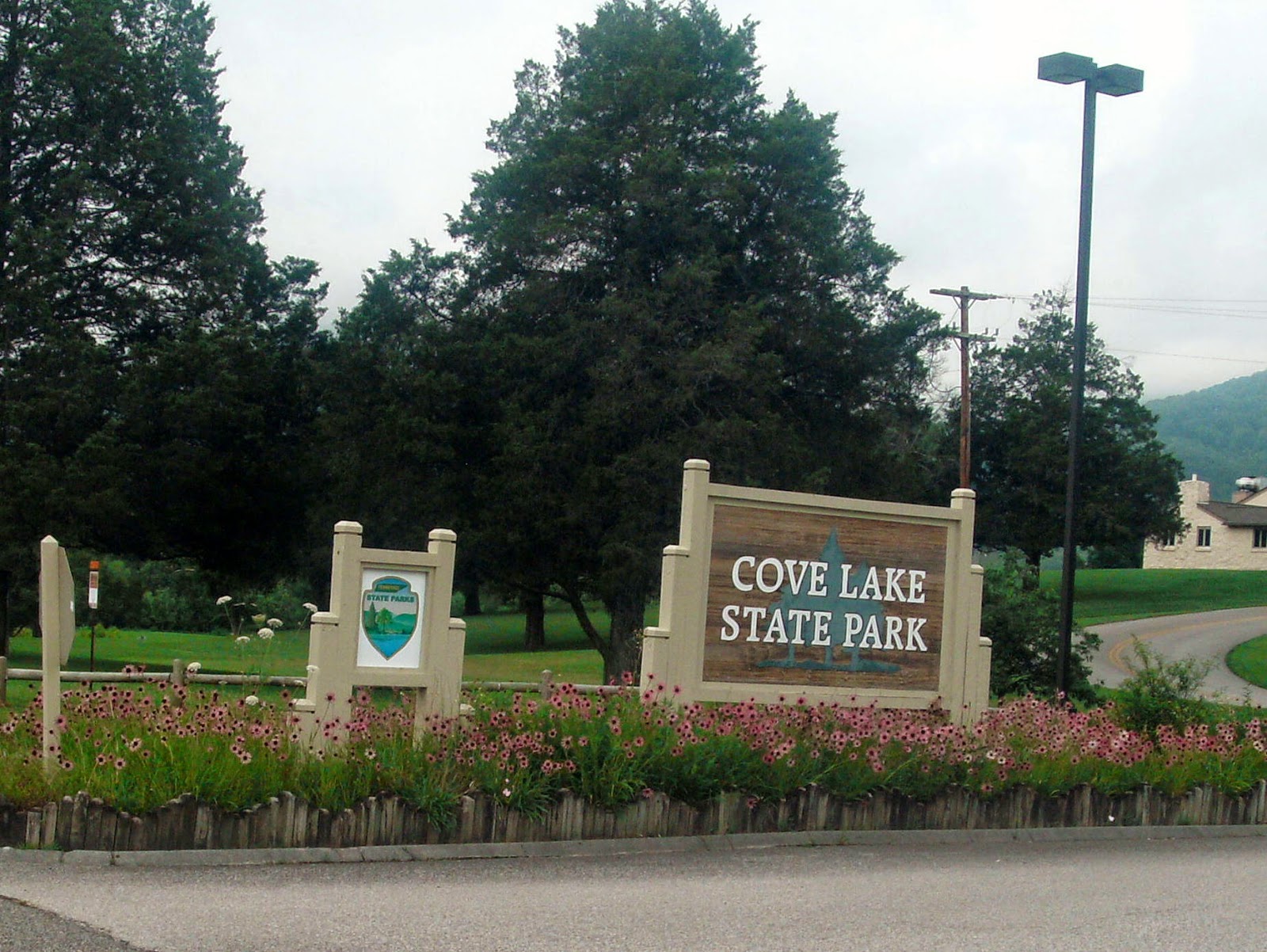 Cove Lake State Park is located approximately 30 miles north of Knoxville, Tn.  The website gives the following descriptions: "Scenic nature trails lead through a diversity of wetlands and woodlands offering wildlife viewing for the nature enthusiast." and "Hiking is a popular activity within the park." We were expecting more of a wooded area with the trails easily accessible from the campground.  As we drove in, we could see a paved trail off to the right.  Granted, we didn't walk around the park much since it rained off & on, but we didn't see the trails that matched the description.
Right before the turn-off to the park, we caught our first glimpse of Cove Lake: 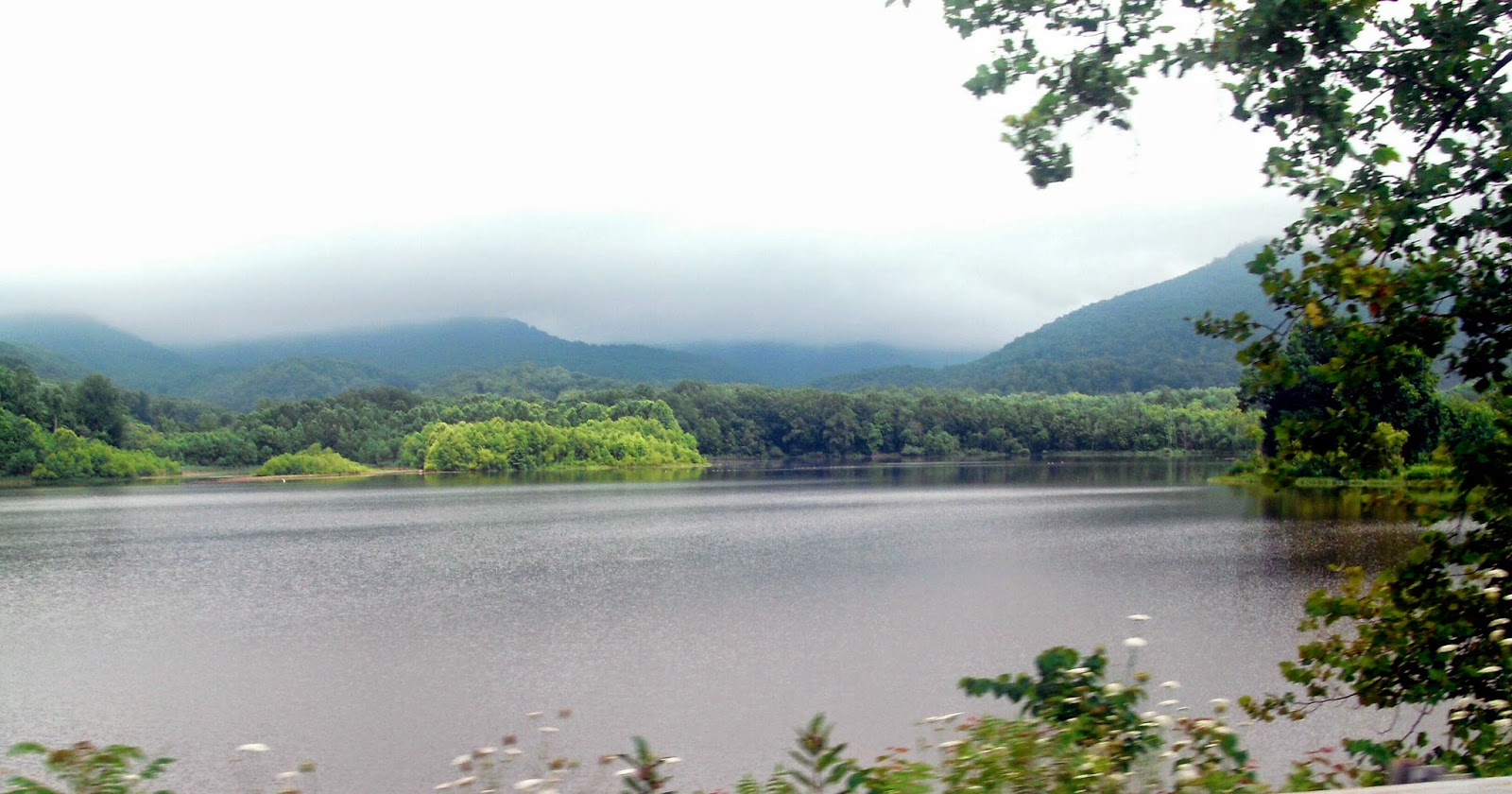 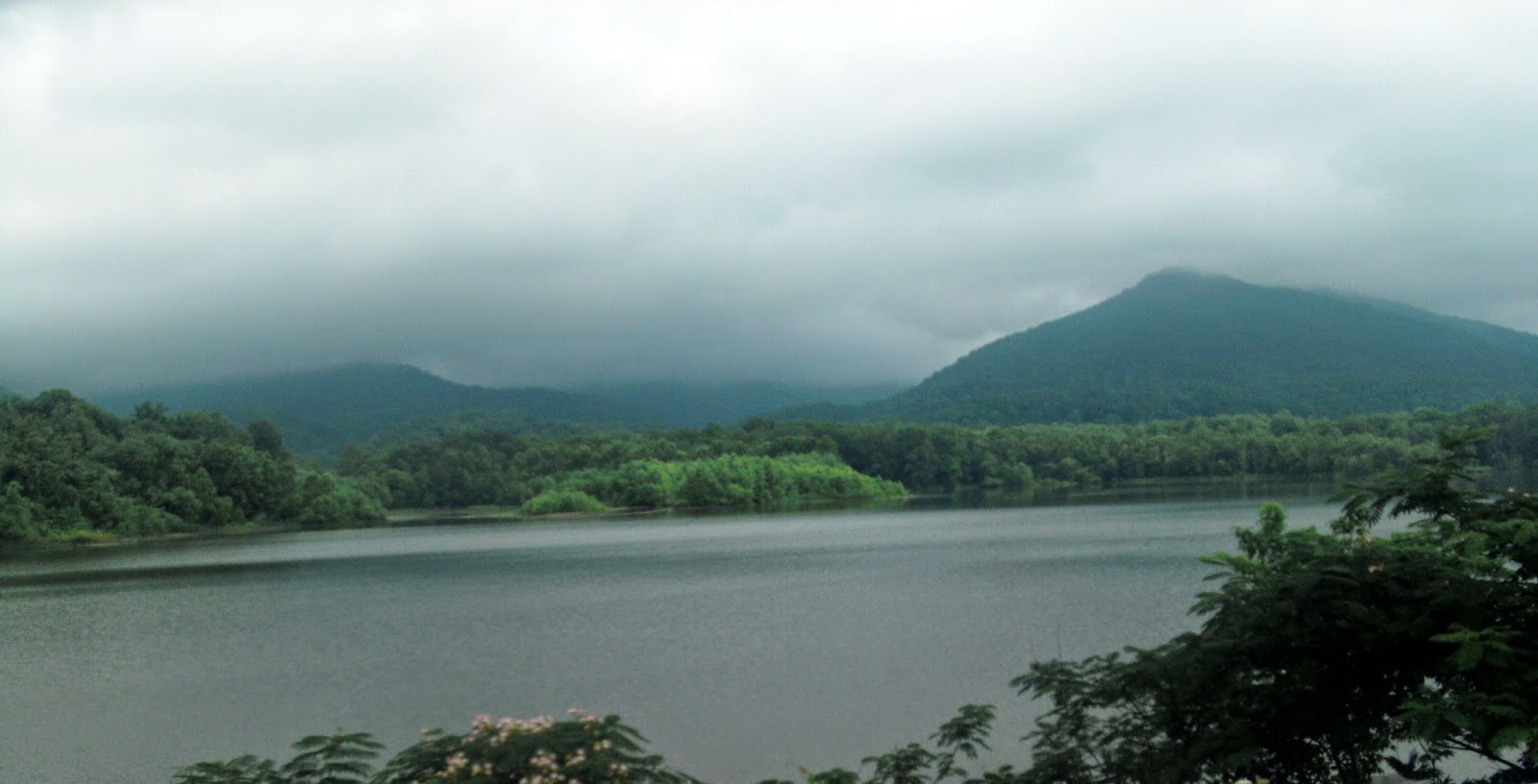 We had chosen a campsite that appeared to be close to the water,so this was what we expected.  Looking at the map, we didn't think we'd be on the water, but fairly close to it. 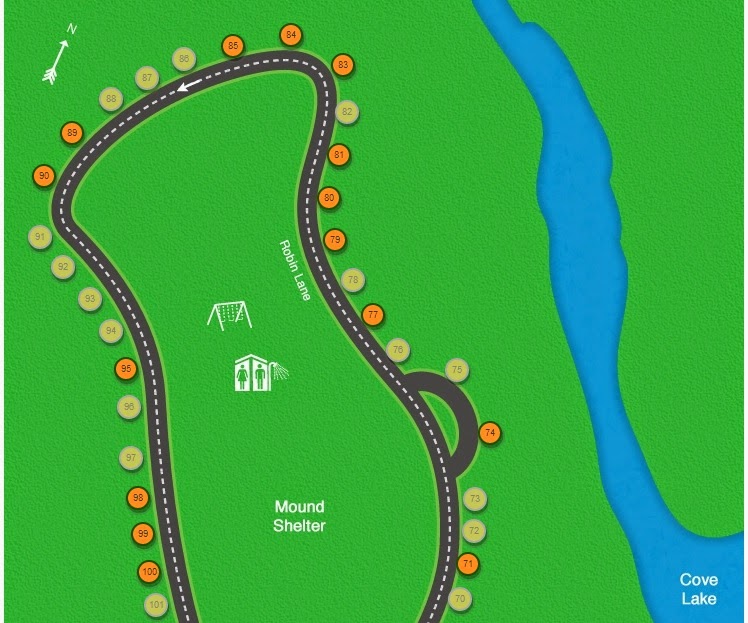 We were in site 79; we could see the water if we walked down a slope and looked through the fence that was covered with overgrowth. The website says that most sites are provided with grills and firepits, which would be accurate.  We just happened to pick one that did not have those amenities.  In the picture above, if you look just to the right of the concrete, you can see a spot where the grill must have been at one time.  And, if you look at the branch directly above that spot, you can see where the fire from the grill must have caught the tree on fire.  We aren't sure why they didn't just move the grill over some instead of removing it.
Our site also didn't have a firepit.  For some reason, that had also been removed. 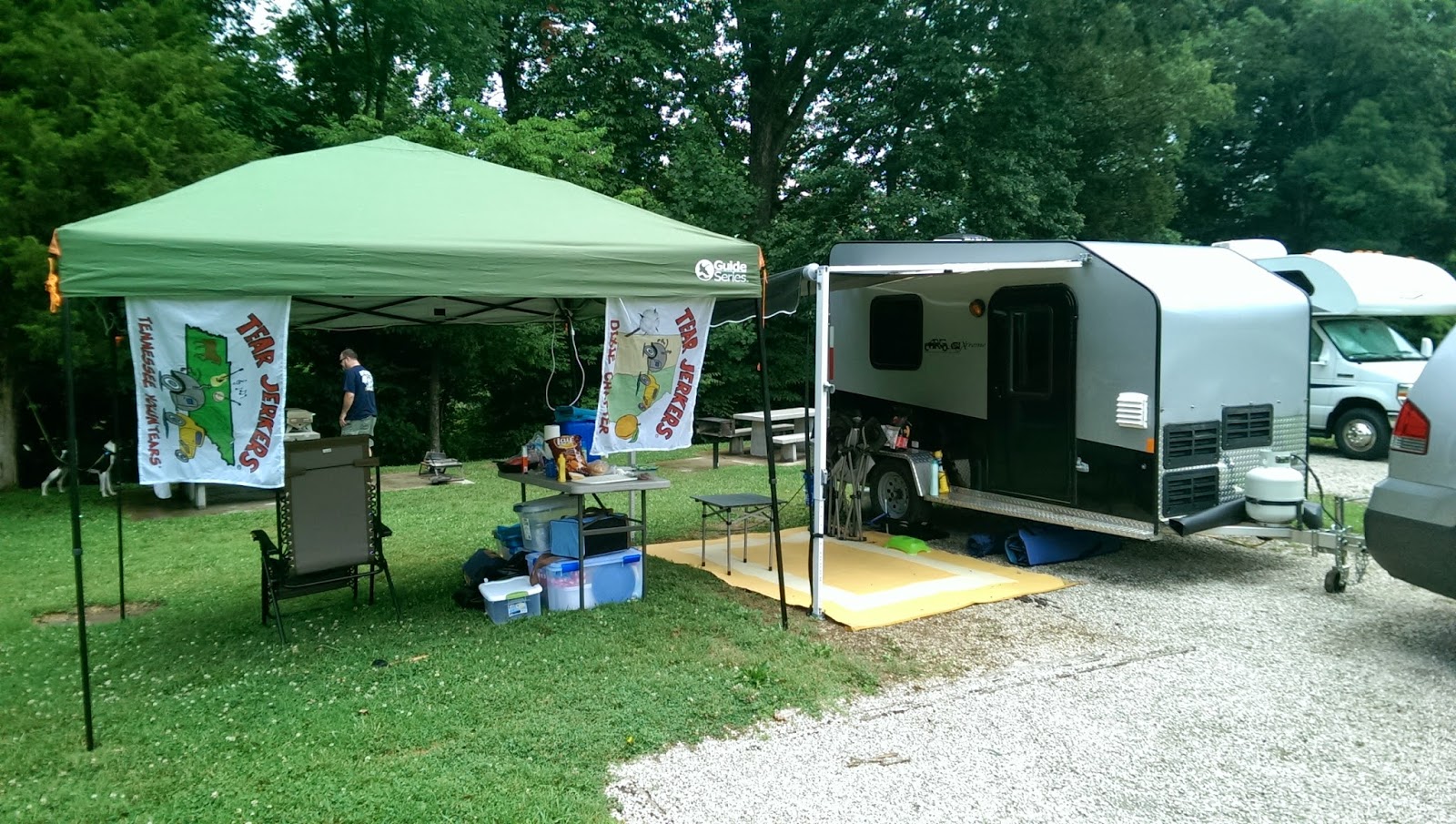 If you look toward the back leg of the canopy, you can see where the pit once was.  Since we usually don't use the grill provided and we didn't plan on having a fire, it didn't really matter to us... this time.
This may give you a better idea of where the firepit was: 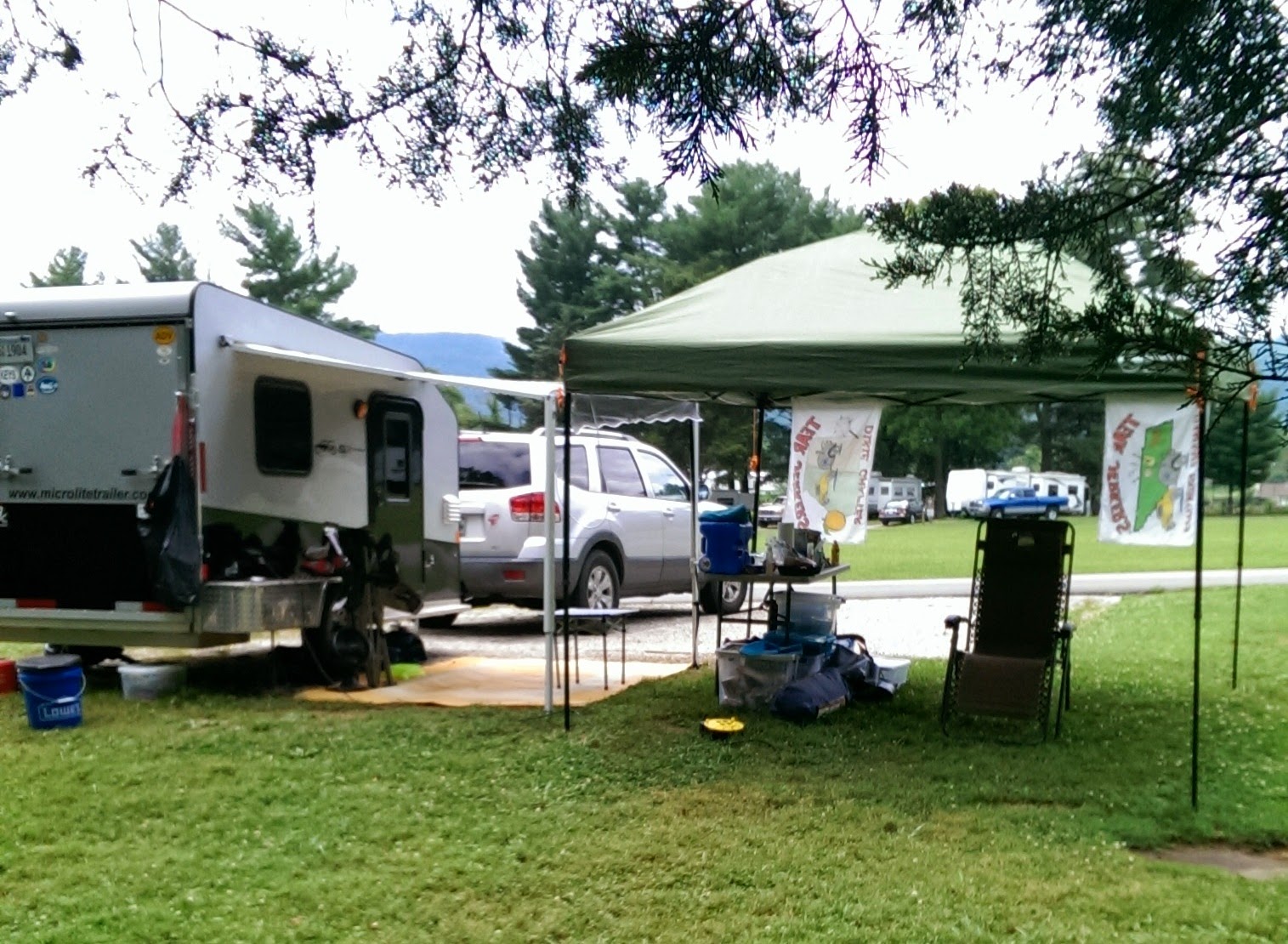 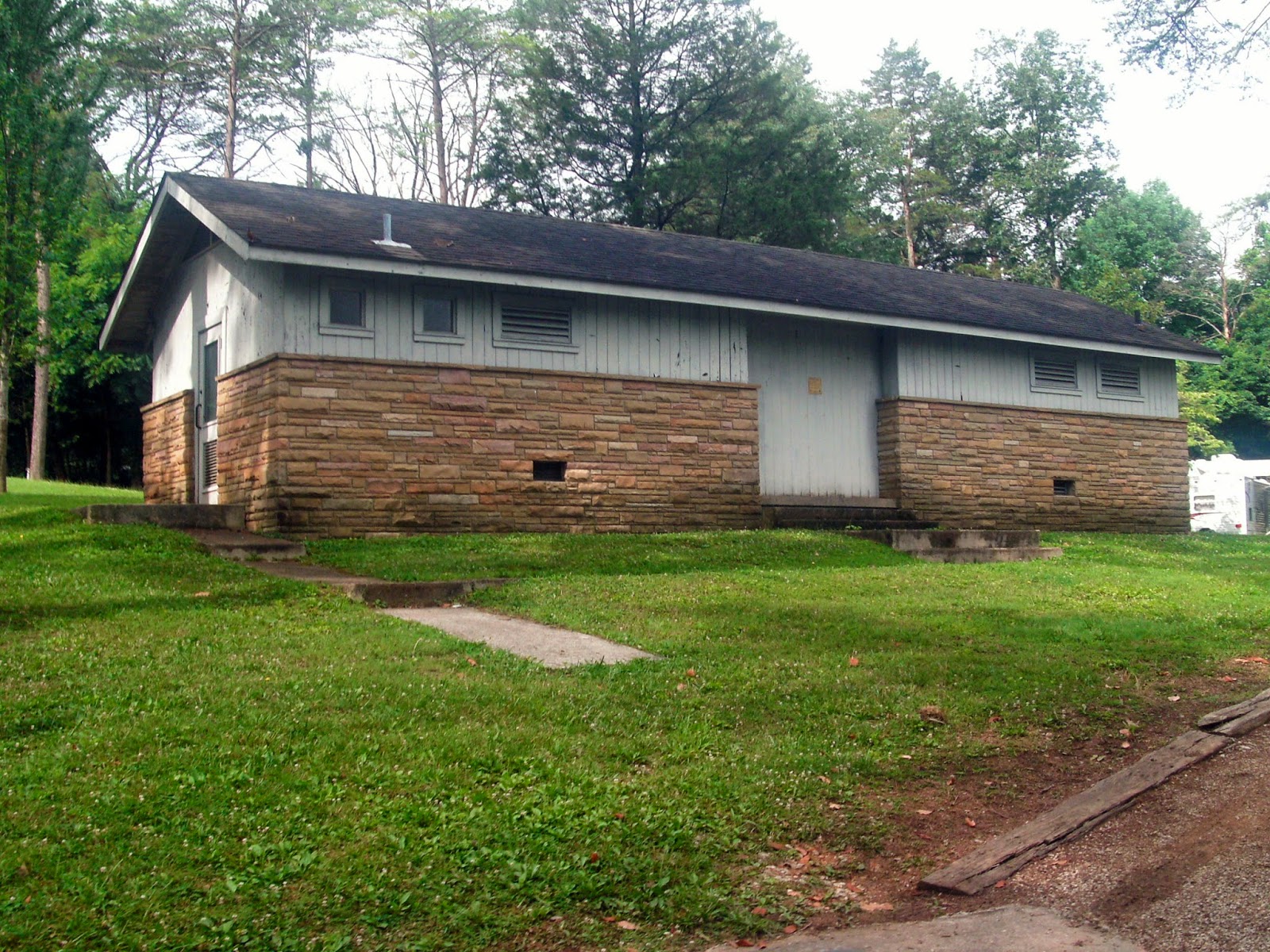 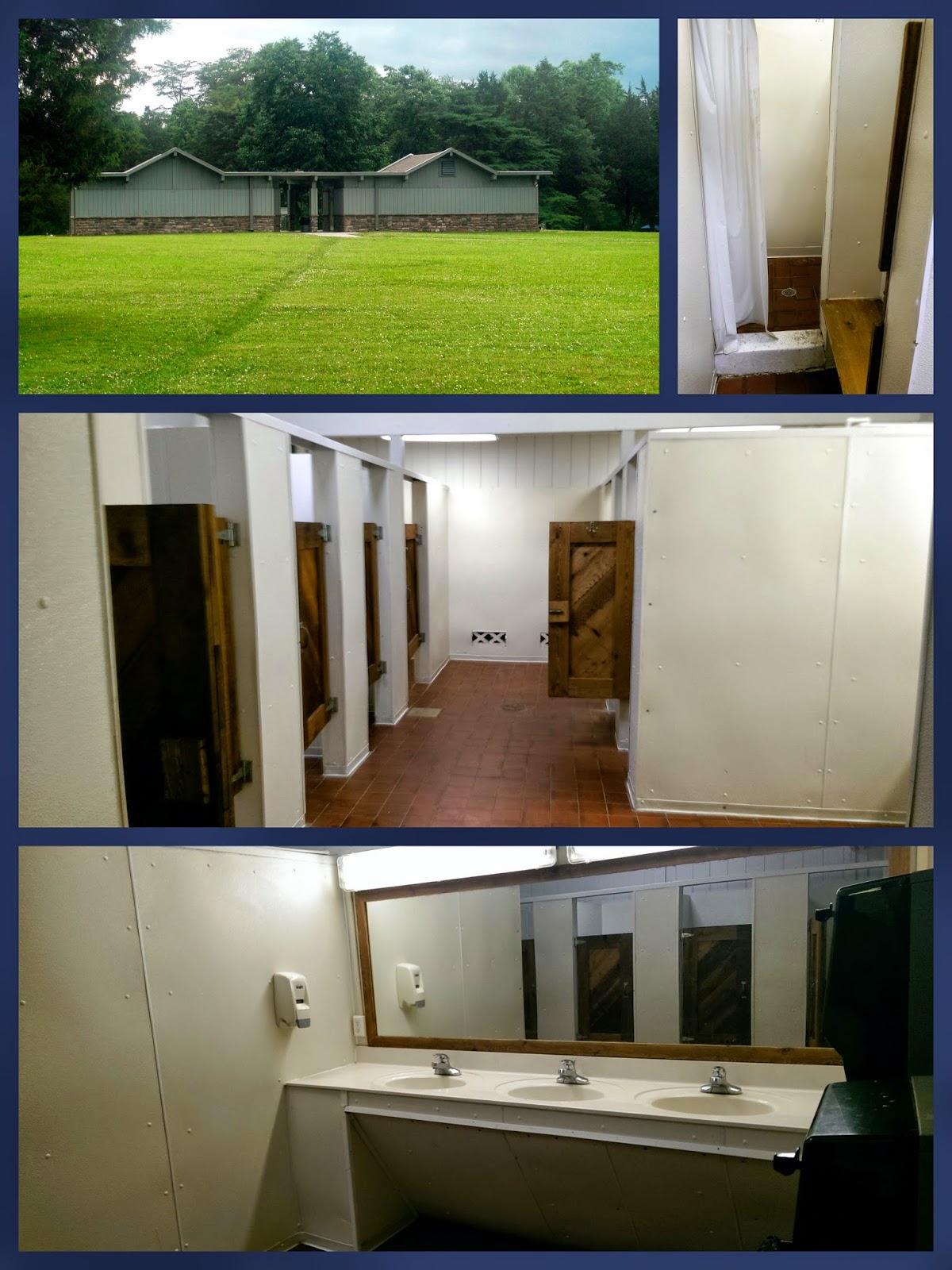 They were clean, although the water pressure in the showers was a bit low.  And, every time someone flushed the toilet, there was no hot water for a few seconds.  There were soap dispensers and paper towels near the sinks that were well supplied.
The campground would be a good place to camp if you have children:  there is a good-sized playground right in the middle of the "C" Loop.

There is also an area for volleyball & horseshoes on the same Loop: Also in "C", there is a "Mound Shelter", which would be ideal for sitting around & talking to your neighbors when it's cold. 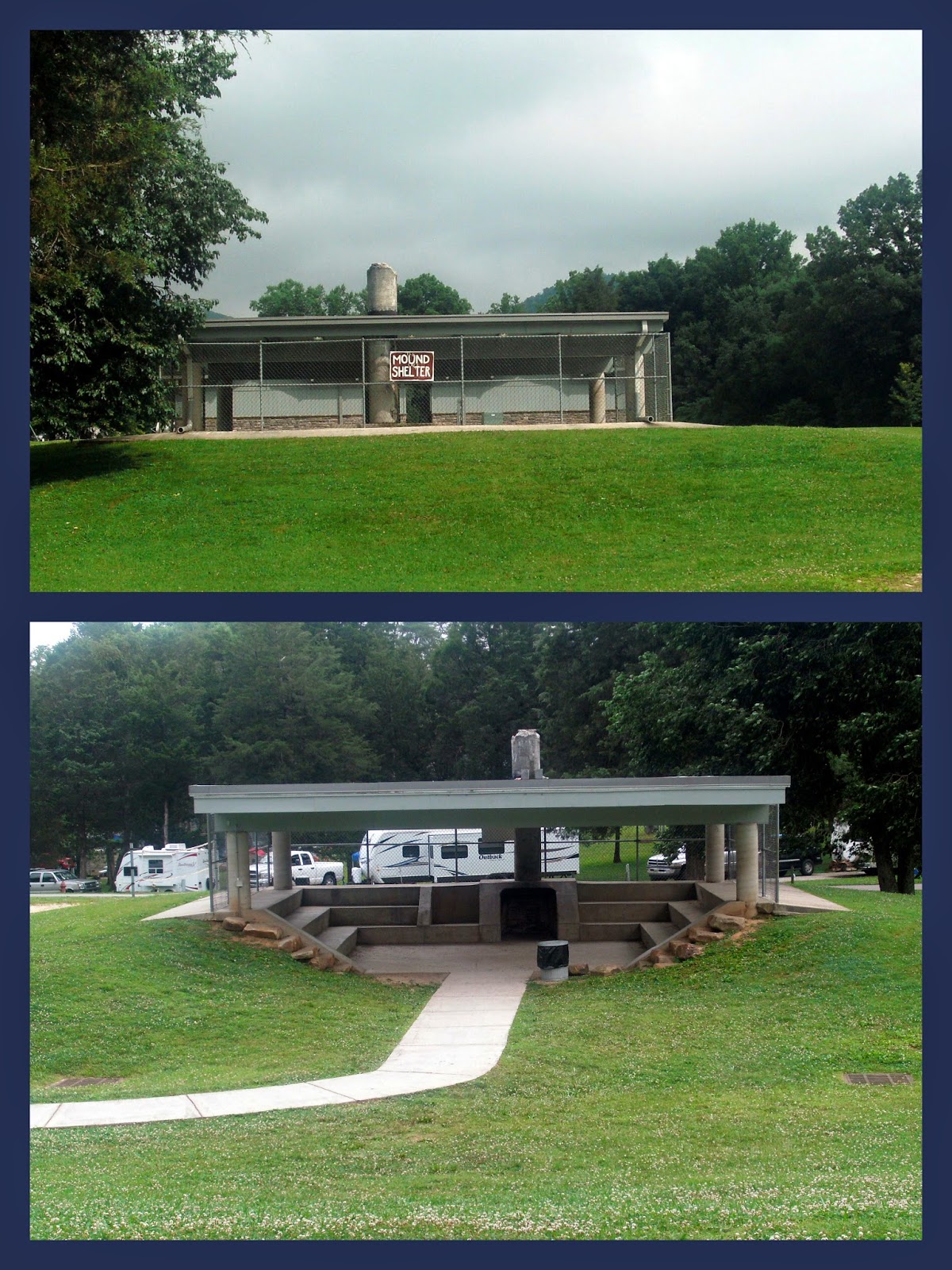 A fairly large swimming pool (available to campers for $2) can be seen as you enter the park: 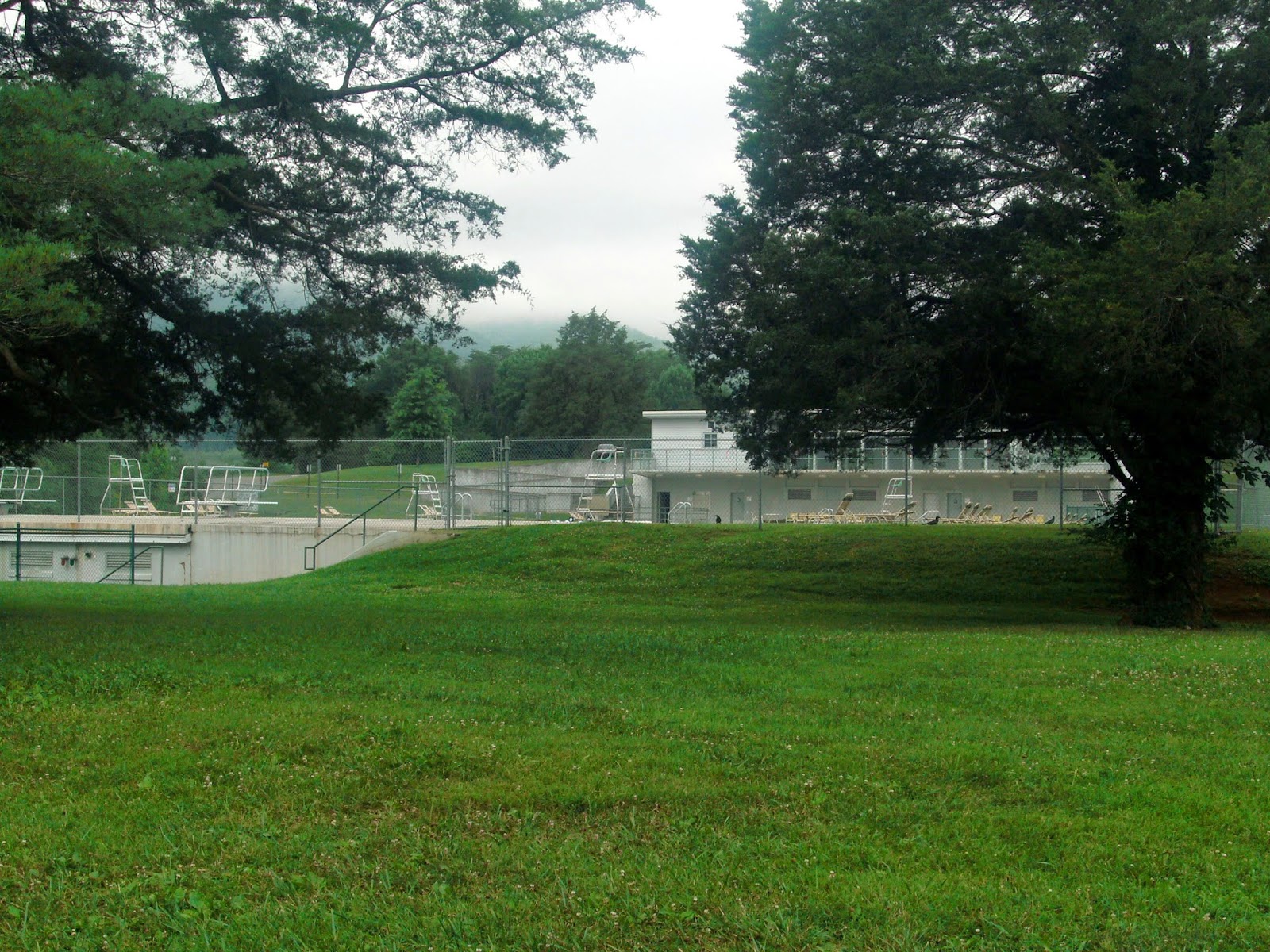 (The back side of the pool)
On the other side of "C" (from our site), the campground backs up to a trailer park.  While there is a little bit of distance between the campground and the trailer park, you can view the trailers from your site.
The campers, for the most part, obeyed the "quiet hours" and the Park Rangers made their rounds every few hours.  Leash laws were also obeyed.  The campground is very clean and well-maintained.
Overall, we were a little disappointed in this campground.  As we said before, if you have children, this would be a great place to camp, if this kind of campground is your thing.  We were a bit disappointed in the seemingly lack of access to the hiking/walking trails from the campground, as well as the overall scenery.  It just didn't have the "outdoorsy" feel that we prefer.  Our best views were when we ran to a local WalMart for anti-itch spray.  The biting flies/chiggers were horrible, even after using Skin-So-Soft. 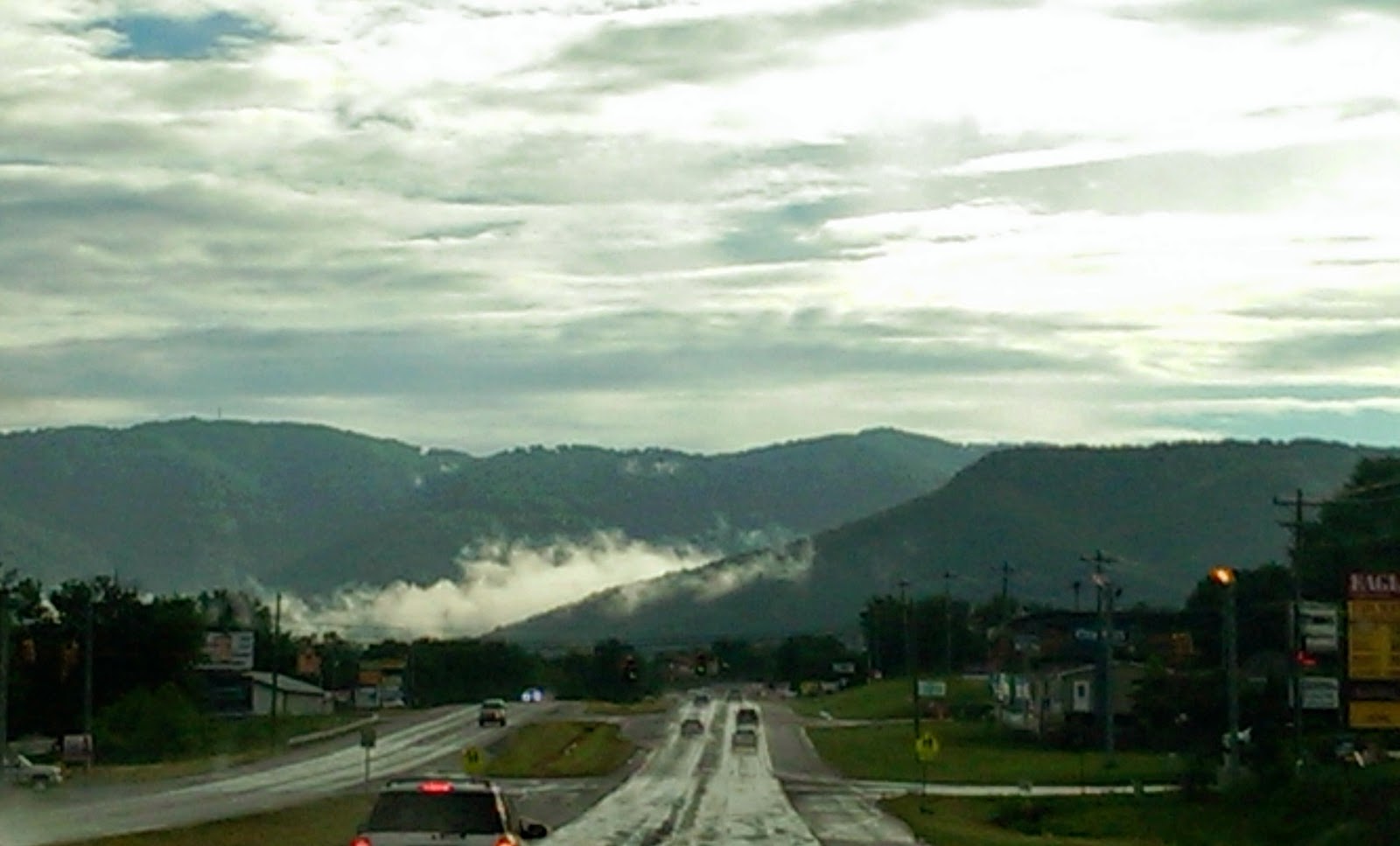 The campground had 4G, so we were able to turn on the hotspot and stream a movie from Netflix while we waited for the rain to stop on Saturday.  Another good thing about the campground:  there was no flooding of the campsites.  Of course, the rain we got on Saturday wasn't enough to flood anyway, but there was no evidence that any of the sites we saw would have flooded, especially in "C".
We usually take a map of the campground on a walk and mark the sites that we like for next time.  We didn't do that this time; we don't think we'll be coming back here again.  You can get an idea in this picture of how close together the sites are:

As previously stated, if you have children and like "this kind" of camping, then you will love this campground.  It just wasn't our preferred way to camp.