Hiring a Campervan in Ireland: Words of Advice This is the first installment of a series of "Camping in Ireland" posts.
While planning for a major milestone birthday, Robert asked what I wanted to do. I suggested a trip to Ireland; he came up with the whole "camping in Ireland" idea and set the wheels in motion. He contacted an English friend who recommended Bunk Campers. They rent campers in different sizes to fit your needs and have locations in the UK (England, Scotland, Northern Ireland) and the Republic of Ireland. Be prepared: they mostly have manual transmissions. The Aero+, Grande & Europa have an automatic option but it's based on availability.
For our purpose, we hired the Aero. It was perfect for the two of us and gave us more than enough storage. We probably would have been comfortable in the Nomad (a VW bus with a pop-top roof) but it was nice not to have to get the bed ready every night. Plus, it was nice to have a toilet without worrying about trying to find one while we were traveling. Being from the USA (with wide roads and most of Ireland having narrow ones), the Aero was just wide enough to make things interesting when meeting another van or a lorry. 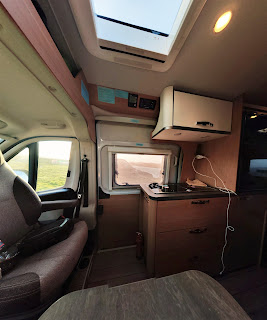 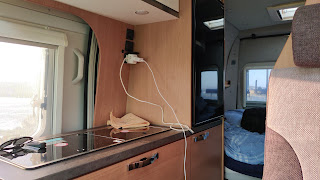