This year for our annual Christmas-New Year’s getaway, we decided to try something different and go somewhere we’ve never been. Last year’s vacation to St. Andrews State Park (Fl.) was cold and rainy, so we decided to go a little further south. That turned out to be a good plan because St. Andrews was hit hard by Hurricane Michael and is, for all purposes, non-existent at the moment. One of the volunteers we met either last year or the year before mentioned Manatee Springs State Park so that was our choice for this year.
I called the campground on the morning of our reservation since I already knew we would be arriving after sundown when the gate is locked. I was told that the code was not given out until after 4:00, so I called again that afternoon and received the number to get into the campground. When we arrived at our site (#75) we were greeted by a couple of deer who were bedding down just behind our site. They ended up moving as we quickly set up the camper so we could crawl into bed after our 8.5 hours turned 12-hour trip. No one was in the site next to us so CH was able to pull through that site to drive into ours. I think this was one of the easiest pull-ins to a site we’ve had. 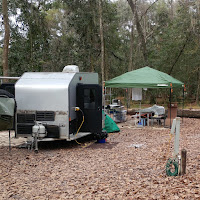 Campsite #75 ended up being a good choice; 74 has a trail leading to the springs right behind it so people were intermittently walking to get to the springs to see the manatees. Unfortunately, the area had quite a bit of rain; swimming was not allowed due to “brown-out” conditions of the spring. We were able to see the manatee coming up when they took breaths, but the water was too murky to see them otherwise. I heard people commenting that usually, the water is crystal clear. The springs feed into the Suwannee River, so when Georgia has a lot of rain the water backs up into the spring. The water was over the patio. That is a covered umbrella in the middle of the picture. All of the sites are quite large. We were able to set everything up without worrying about the easy-up being too close to the fire pit. 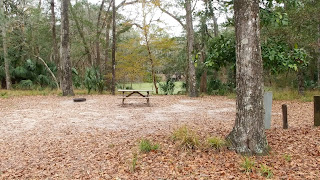 The sites are only along one side of the loop; the center of each loop is preserved with vegetation and the bathhouse. 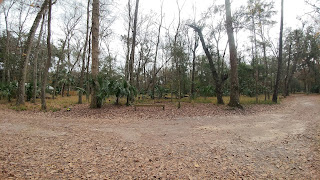 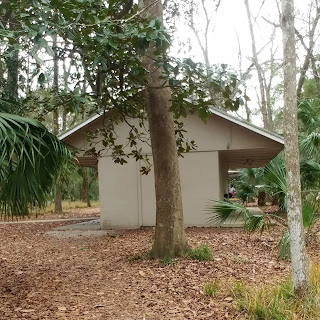 We stayed in the Hickory loop, which is in desperate need of updating. You really notice it after looking at the Magnolia loops. I don’t know about the sites in Magnolia, but in Hickory, they aren’t raked between visits. The road doesn’t appear to be as well maintained as Magnolia, and the bathhouse is in need of updating. That being said, I’m not sure why Florida insists on putting up these hooks in their bathhouses that don’t hold anything on them. 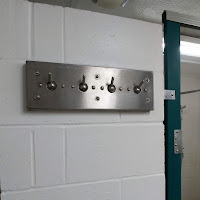 The bathhouse in Hickory was okay though. The shower didn’t have great pressure, but it was warm. Soap is provided by the sinks, although the hand dryer only put out cold air. This bathhouse had 2 sinks, 3 stalls, and 3 showers. 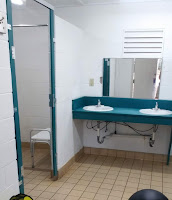 No benches (or hooks) in the shower makes it hard to change into dry clothes after the shower. 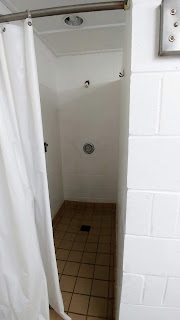 There is a handicap stall in Hickory Loop. 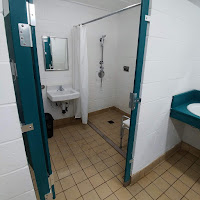 Needs updating but is very clean. The 3rd shower stall had a space for changing when you get out of the shower, as well as a baby changing table. 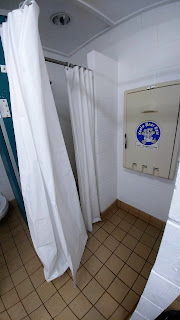 Don’t even think about putting up a utility tent here, even if you don’t use it for showers. If you’ve read our other posts, you know that I put up the tent to store my luggable loo for those late night/early morning trips. We ran into this same problem at Edisto, but the ranger let us keep it up as long as we didn’t have water in it. The ranger at Manatee Springs was unrelenting. He put his foot down and said absolutely not. He said that if other campers see a shower tent they will think they can do it, too, and then he said something about gray water. We totally get that; we are very careful about gray water.
BUT…if they’re so worried about gray water, why don’t they have washing stations at the bathhouses for campers to wash their dishes? This is something I’ve always wondered about…where are you supposed to wash your dishes if they don’t provide a place? Not everyone is in an RV or camper with water. Tent camping is very popular, and people do cook outdoors on pots and pans. I’d love for someone to answer this for me.
See? Plenty of space for a sink to wash dishes. Take out the water fountain (I wonder if it's even used?) and put in a sink.

Maybe we have been spoiled by the other places in Florida where we have stayed. There isn’t much to do around the park. It’s rather small, so after riding your bikes through the 2 trails and trying to see the manatees, you’re done. A week is really too long to stay; 2 days…3 at the most would do it. While it’s very cool to see the manatees in their natural habitat, we saw them better when we were in The Keys and they would come into the boat slips.
There is a place at the springs to rent canoes & kayaks. They have a very small camping store; your best bet would be to drive the 5 miles into town and shop there instead. Wi-fi can be used at the snack shop but it has a very limited range…As in only directly in front of the window. We ate lunch there one day; their barbecue is pretty good; not the best we’ve ever had, but not the worst, and fairly reasonable. 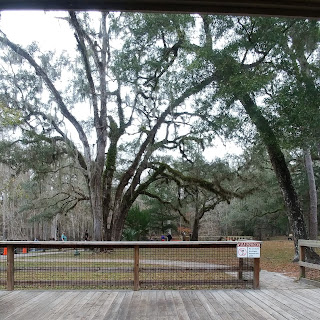 If you’re a diver, there are a couple of sinkholes with caves. I wouldn’t be too sure about getting in the water with all of that green stuff on top, but apparently, it’s no big deal because we saw a few divers in Catfish Hotel. 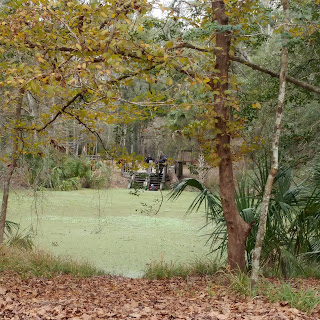 If you’re coming to Manatee Springs specifically to swim with the manatees, check the weather. I would even suggest booking a reservation in this park and another one at the same time. Just make sure you know the cancellation policy. We didn’t think ahead so by the time we were thinking about going someplace else, everything was booked. I definitely wouldn't plan on spending a whole week here; there just isn't enough in the surrounding area to keep you busy. 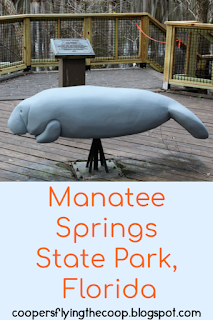