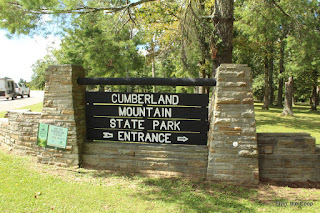 The park is very well maintained; we arrived in a thunderstorm that made some branches fall onto the road. The next morning they were all picked up.

The sites have electricity, water, and full hook-ups. We were able to turn on the hot-spot for internet (to watch Netflix at night before we went to sleep), and had decent cell service. Each site is equipped with a fire ring, grill, picnic table, and lantern pole. There is also a garbage can at each site. The sites we saw were concrete with gravel attached to it, and all of the sites looked fairly level.

Some of the bathrooms have recently been renovated. The one closest to us had not been, but it was still decent. The shower was hot and had really good pressure. 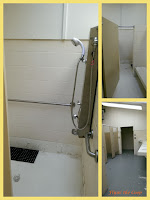 One thing I really liked about the shower was the number of hooks. There were 2 attached to the door, and then 2 more next to the actual shower.

The only thing we found lacking at the campground was a place to wash dishes, which is important to us since we don't have water in our camper. Well, the washing isn't really important, the getting rid of the gray water is, though.
Within the park, there is a nice swimming pool with a snack bar attached to it. 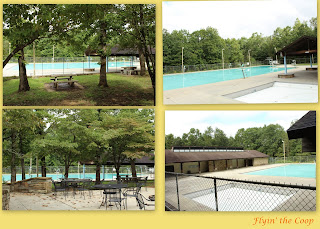 There is a "campstore", but be aware that it is almost empty, except for some t-shirts. It could be that they are waiting on more supplies, but it was almost empty.

On the other side of the campstore,there is a red-tailed hawk and barred owl in captivity. 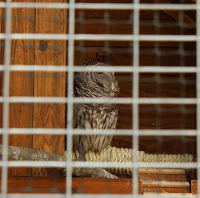 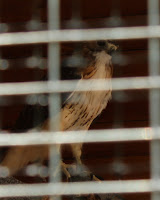 If you're looking for some hiking to do, there are plenty of trails available, as well as a swinging bridge. I have heard that the restaurant is very good, although we didn't have a chance to check it out. The restaurant is on Byrd Lake, which is also the site of a dam built by the Civilian Conservation Corps. The dam, completed in 1938, is the largest masonry structure built by the CCC and is also considered the largest non-reinforced dam in the world. There is a nearby quarry that supplied the sandstone to make the concrete. The plants that were on the floor of the lake were dug up and transplanted for use in landscaping the park. 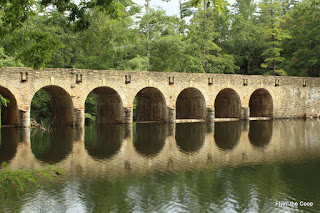 If you don't want to camp, there are 3 different cabins available: Standard, Timber Lodge, and Luxurious. 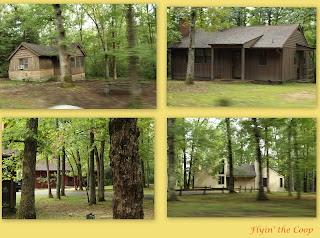 Overall, we were very impressed with the park. We're putting this one on the list of places to return!