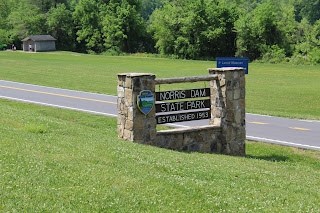 Mid- to late- May is a good time to go camping in East TN: it's not too hot & humid yet and the nights are still cool. The problem we have is that we usually decide at the last minute to go, and with COVID, camping sites are hard to come by. I looked at our usual campgrounds but every place was full at the beginning of the week. There was a campground in the Great Smoky Mountains National Park that we hadn't been to but there is no electricity at National Park Campgrounds (at least around here). My next step was to look for state parks around us. I found Norris Dam State Park, which is just north of Knoxville. At the beginning of the week, there were plenty of spots available. So that made me a little nervous. I figured it was either going to be a hidden gem or a really crappy campground.
When we arrived at our site, we weren't sure what to do: Where were we supposed to put the tent? There is, what appears to be, a double parking space with one side a bit longer than the other. 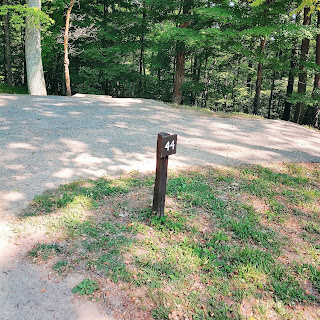 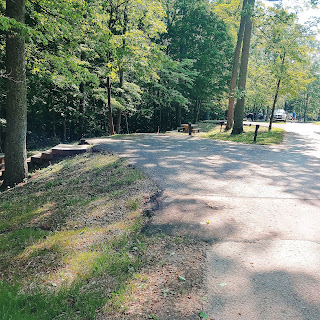 There is a grassy area with a grill, table, and fire pit but the grass appeared to have just been sown and it wasn't level. 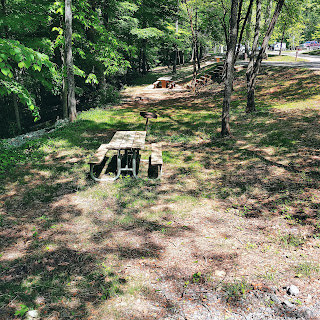 We saw a State Park Employee so asked him where to put the tent. He was very nice and radioed the office since he had only been working for 2 weeks and didn't want to tell us the wrong place. The Campground Hosts ended up walking over and gave us a couple of suggestions. They said that most people use the asphalt, which was fine since we have cots. 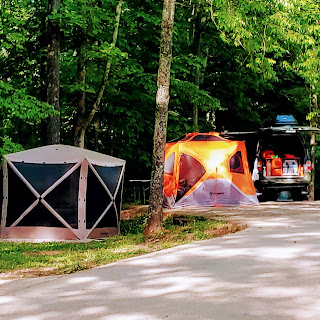 The site we had (46) had 2 picnic tables and 2 grills...one on either side of the drive. We put our Gazelle gazebo over the newer picnic table. We weren't sure if it was going to fit since this table was a little larger than your average picnic table. It was a tight fit, but it worked.

I should add that our site was on the outer ring of the West Campground. The inner ring had longer drives and a place to put a tent in the grass, but there was a big water tower in the middle of the area next to the playground. Some of the outer sites on the other side of the campground were conducive to putting the tent in the grassy area.

We drove over to the East Campground. As soon as we drove in we knew we were in the better part. 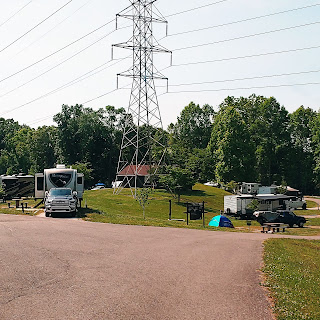 This campground has fewer sites and (as you can see in the picture) a big tower in the middle of it. I didn't take a picture of the playground, but the one in the West was newer and bigger. 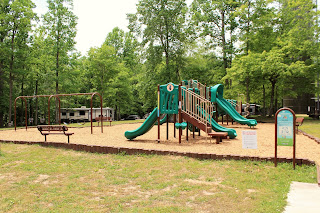 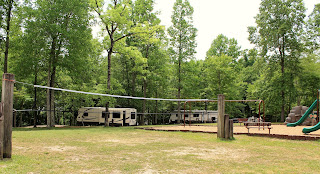 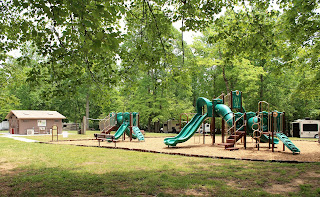 The brown building in the last picture is the bathhouse. A few years ago the State of TN updated the bathhouses. In this building, there are 4 separate showers/toilets. The first impression was "prison toilet". 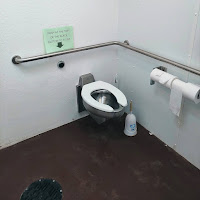 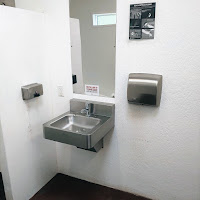 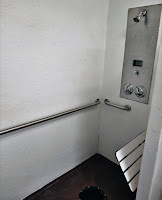 Having the shower & toilet in one room is a great idea unless you have to use the restroom and all of the rooms are occupied with people taking their showers at night. Then it's a little problematic.

The bathhouses were clean and well maintained. I can only speak for the water pressure in one of them: it was okay. Not as good as home, but that's to be expected. There was plenty of toilet paper and each room was supplied with hand soap. There were no paper towels...only a hand dryer that worked pretty well.
Once again, one of our complaints is that there isn't a washing station to wash dishes. We ended up washing dishes in the bathroom because there was nowhere else.
The sites have water and electricity. Dump stations are available at each campground. Even though one of our past governors wanted the internet to be available at every State Park, it is not available here. We had a decent cell signal; enough that we were able to turn on the hotspot and watch a movie on Saturday night. There is a "canteen" with basics in case you need it. It's a walk-up building and is open until 8:00 pm.

The park has quite a few hiking trails with varying lengths and levels of difficulty. The sign below lists some of them. 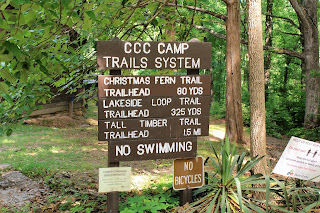 The Civilian Conservation Corps (CCC) had a camp on this site while building the dam. The cabins used by the workers are available for rent. 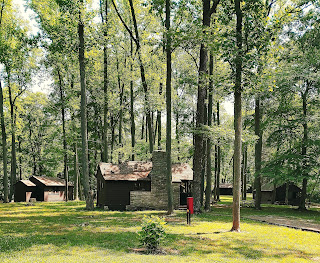 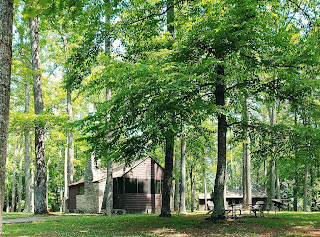 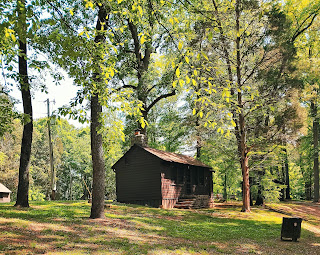 There is also a "Tea Room" that is available to rent for gatherings. A wedding reception was being set up the day we were there. 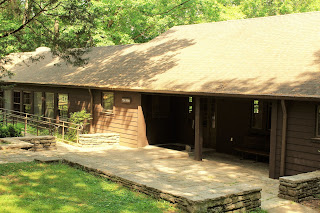 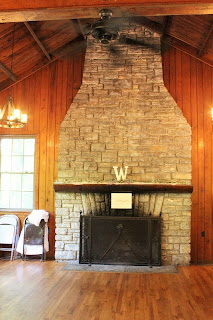 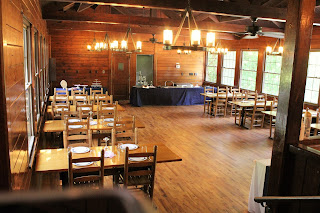 If you're looking for things of interest in the area, here are a few ideas: 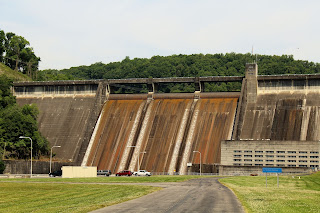 Norris Dam was the first dam built as part of FDR's New Deal. There is a marina with a restaurant. There's plenty of fishing and boating to be enjoyed. 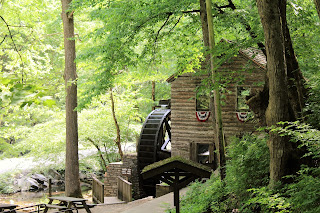 Rice Grist Mill. It is a working mill; flour and meal are available for purchase in the gift shop, which is on the top floor of the mill. 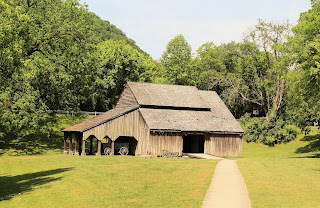 The Caleb Crosby Threshing Barn is right beside the grist mill. After their land was scheduled to be flooded with the building of Cherokee Dam, the family donated the barn to the National Park Service, who apparently forgot about it. It wasn't put back together until 1978, 34 years after it was dismantled on its original site on the Holston River. 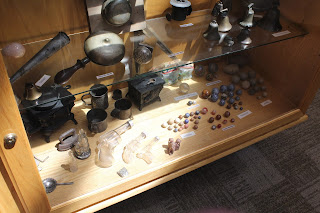 Walk up the hill from the grist mill and you can visit Lenoir Museum. This is a very small museum, but it houses some interesting artifacts.
The Museum of Appalachia is also in the area, not far from the Lenoir Museum. This Smithsonian Affiliated Museum is a living history museum of life in Southern Appalachia. 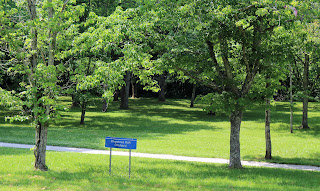 There is an Orchard Trail near the dam. It looks like a great place if you want to walk, run, or take the dog for a walk. There are signs to identify what orchard you're walking through.
If you're thirsty and/or hungry, you won't want to miss Clinch River Brewing. It has a small menu with a Louisiana flair and a great atmosphere. You can dine inside, outside on the front porch, or in the back around a pond with some good-sized rainbow trout swimming around. 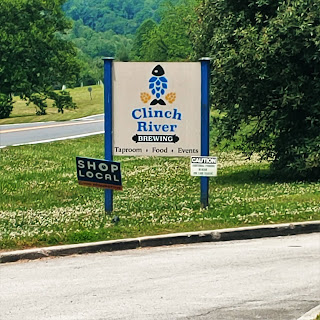 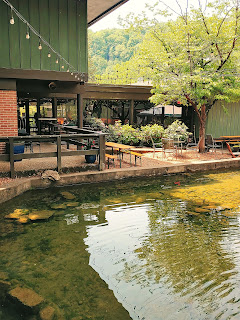 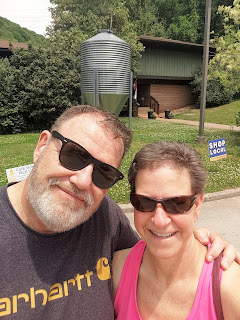 Overall, we didn't think it was a bad park. Will it rank high on our places to camp? No, but if we can't get in anywhere else, we'd rather camp here than nowhere at all. If you have kids, this would be a great spot with the playground. There is a swimming pool for those hot summer days as well. Mary didn't feel it was as relaxing as other places we've stayed. She usually sleeps really well while camping but didn't sleep so great this time. Maybe it was because of the proximity to the road. Robert slept well, but he usually does anyway!
To answer the question: Hidden gem or crappy? we'd have to say somewhere in the middle. 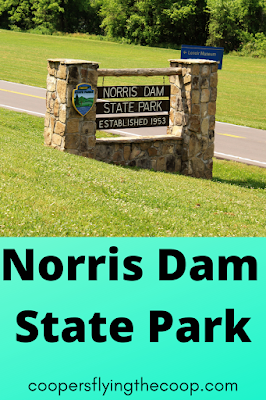