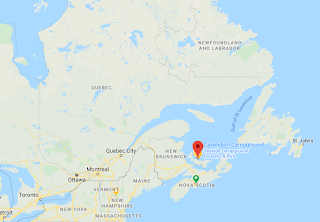 We took a trip to the Canadian Maritimes in July. Robert traveled that way on his motorcycle a few years ago and knew that I would love it. We planned to go a couple of years ago but had a change of plans due to family matters. We had a not-so-relaxing vacation the previous summer and our Christmas vacation was a fiasco. We were looking forward to what we hoped would make up for the past year's "vacations". 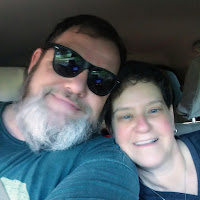 Robert had a new Gazelle Tent to try out. Since I'm not a big fan of sleeping on the ground, before the trip I tried out an older cot. I set it up in a spare bedroom and spent the night. Nope, it was not comfortable at all, so I tried Robert's cot. It was fantastic! I hopped right on to Amazon and bought my own. I've got to tell you: after a few nights in an AirB&B I was looking forward to sleeping on the cot again...that's how comfortable it is.

We debated about taking the trailer with us or tent-camping part of the time. Not taking the trailer was a good decision. We knew it at the end of the first day of travel when we went through a good 2 hours of torrential rain and thunderstorms. Robert had just enough when we got to our first destination.

We decided to do a mixture of B&Bs, camping, and we even stayed at an AirB&B during one leg of the trip. Robert wanted to make sure I could sleep on a cot in a tent before he committed me to a whole vacation in a tent. When it was said and done, I definitely could have done the whole time in a tent.   Especially this tent and this cot.

We camped at the Cavendish Campground on Prince Edward Island for a couple of nights. We had an awesome spot.
Bank Swallows were nesting across the road from our campsite so there were no sites open. The only time we had rain was when we camped, but it only rained a bit and then it was done. The tent stayed dry so no worries about getting wet, plus it held up great in the wind. We put up Robert's Rhino-Rack 270 Degree Awning and 2 side panels that he has on his truck. 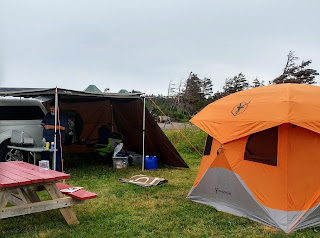 I thought we had a sweet little set-up. Unfortunately, we didn't take a picture of the inside of the tent with our cots in it. We had plenty of room for both cots and space to walk around.  The best part about this tent is the set-up. We had the tent up, staked down, and the rain fly on in about 10 minutes. Pulling the tent up (literally, pulling it up) took about 2 minutes, if that long. It was definitely a lot quicker than getting the trailer set up.

The campground was pretty nice. The water pressure in the shower wasn't that great, but it was about the same in the B&B where we stayed the previous nights. We washed clothes right before we left for the next leg of our trip. The washing machines and the driers were extremely efficient and quick. Each campsite had a fire grill. Since we were in the tent section we didn't have electricity or water; however, there were "charging shelters" (I don't know that that's what they're really called.) strategically placed around the campground. It also has water spigots so you can fill water jugs.

The campground is conveniently located, with a store nearby and the House of Anne of Green Gables not far away. Our site was very close to the beach access, so I took advantage of it and walked to get a better look at the Bank Swallows.

Someone asked about the bugs. The wind kept most of them away, and I made sure I put on some spray. I had no trouble at all with the bugs while we were there. I used a spray with all-natural ingredients so I wasn't really sure how well it would work, but it worked like a charm!  I also used "camping soap" from the same company for added protection. For more information, click here.
I would have liked to have stayed there another day or 2 to explore PEI; unfortunately, we had a limited amount of time and were expected at our AirB&B. We would definitely stay here again. 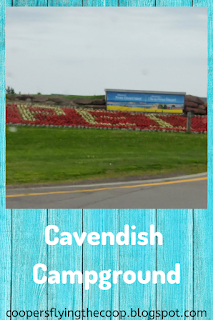