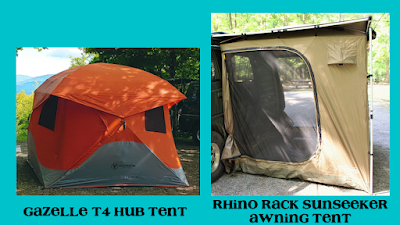 Comparing these 2 tents may be comparing apples to oranges because there are different factors that come into play when deciding to use each one. I'm going to do my best to provide a run-down of both of them and give you my opinion.

As you can probably tell by the above answers, I have to go with the Gazelle. I've gone from having to have a trailer with heating and air to loving tent camping with the Gazelle. I definitely think the Rhino-Rack would be great for cold weather camping but we haven't done much of that in the past. Yes, they are more expensive than the tents you'll buy at a local department store but it's well worth the money...and aggravation of the traditional tent.