We had big plans for our summer of 2021 vacation...and then life happened. We decided to stay closer to home instead of leaving the country, but we knew with it being summer in the South, we needed to head north or higher in elevation.

We found DeSoto Falls National Park near Dahlonega, GA. The location is more in-between Dahlonega and Helen; the Appalachian Trail crosses the highway just up the road from the park. This was a smaller campground than most of the National Park Campgrounds we've been to. We were there at the beginning of the week; there were a lot of empty sites.

As you drive on US Hwy 129, you may almost miss the turn. Coming from Blairsville, it's a sharp right to turn into the park. 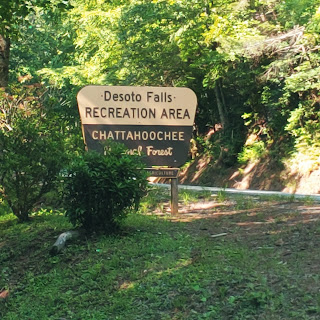 The campground is divided into 2 separate parts: one section has outdoor shower facilities available with flushable toilets and the other section only has "chemical flush" facilities. We had potable water just across the road from our site.

The sites are large and the ones in the loop where we stayed were wooded, with Frogtown Creek to the back of them. Picnic tables, fire pits, and a lantern stand are provided. There is no electricity or water at the sites. 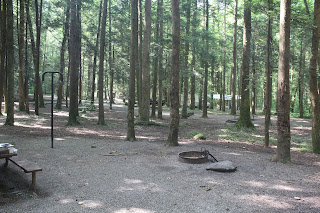 We stayed 2 nights. The first night was the best night's sleep either of us had in a long time. Unfortunately, the second night a family with 3 young children stayed. I say "unfortunately" because I don't think the parents knew (or cared) about camp etiquette. The youngest daughter (who we estimate was around 3 or 4 years old) screamed and cried until around at least 11:00 pm with the parents sitting around the campfire. We aren't sure what they put in their fire, but whatever it was blew into our tent and caused Robert to start coughing. Let me just say that if we had planned to be there another night we would have said something to the ranger. The people who were there our first night also had small(ish) children who were well-behaved and calmed right down when it was time to go to sleep.
Enough of that; camping etiquette with children will have to be another post. There is a very nice, well-kept trail on the other side of Frogtown Creek that leads to the waterfalls. It was an easy hike. We had nowhere to be so we just took our time and enjoyed the flora along the way. The rhododendron wasn't blooming yet but I would say when it does it's absolutely beautiful.

We met Laurene and Shirley. They've been visiting the campground for well over 20 years. Their sons bring their campers up and set them up for them and they spend the summer there. 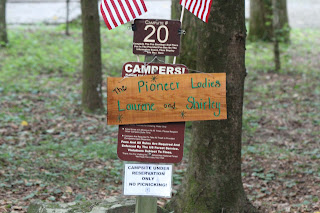 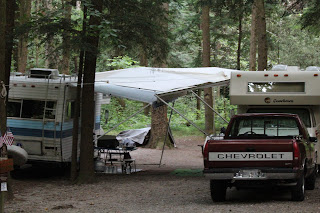 If you're looking for something to do during the day, Dahlonega is close by. We drove in to reminisce about a couple of July 4ths we spent there. We didn't stay long, though. We found Frogtown Winery in between Dahlonega and the campground. It's well worth a stop! 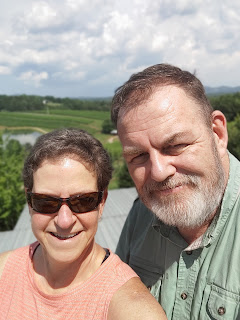 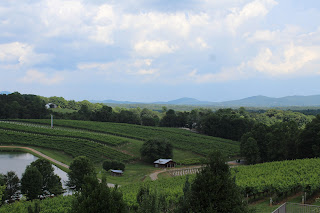 Now the big question: Would we camp there again? Absolutely, without a doubt. The only downside we saw was the unruly neighbors we had that one night. We would definitely try to get our same campsite. There's just something about having the sound of the creek lull you to sleep at night!