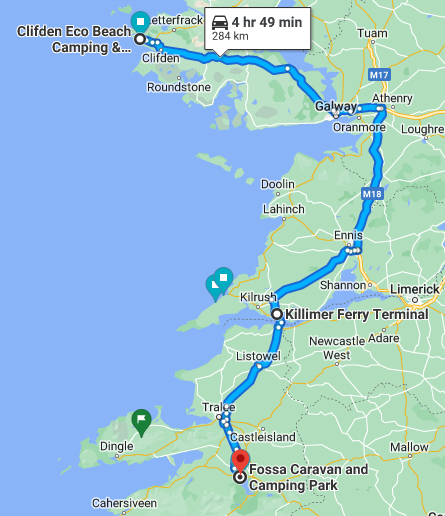 This is going to be a weird post because I have zero pictures from the campground where we stayed for 2 nights in Killarney. I chose Fossa Caravan and Camping Park because 1) it was open (we were there during the "low season" (off-season), and 2) it was close to Killarney. Right before we left for Ireland I found a campground on the Dingle Peninsula that was open. I could have canceled, but unless someone else reserved the site, we would have to pay for it. I decided not to chance it.

We had a "grass pitch" site and it was a little wet. Not terribly wet, but slightly wet. Instead of each individual site having its own power outlet, there was a "communal" one with about 6-8 outlets. That meant it was necessary to have a long cord. The people across from us laid their cord across the road, and it wasn't one that could be driven over. (Not the best choice on his part) The place was packed, but it was really quiet. We only saw a handful of people the 2 nights we were there. On-site is a hostel and mobile homes (although we didn't see these). A pub/restaurant is close enough to walk. Our first impression was less than stellar. It just looked like a trailer park, actually, which is why I don't have any pictures.

Those were the negatives. The positives:  The spot we had was level, and we were told we could just pull in horizontally instead of vertically like everyone else did. The facilities to empty the toilet cassette and gray water were very easy to get to and the 1 to empty the cassette was very clean. The showers were excellent, even though the 1 I was in the first day had a loose shower head and the next day I couldn't control the temperature in the other one I tried. They were extremely clean and they were free. (Always a plus!) There were 6 total showers in one building and on the other side of the area where we were there were 2 more that were handicap accessible. That building also had toilets. The side of the area where we were had toilets in the back of the office building, as well as a kitchen and laundry that could be used. Did I say how quiet it was, even though it was crowded? It almost felt like we had the whole place to ourselves.

I mentioned the restaurant/pub within walking distance. The night we arrived we walked over. Robert called ahead and was told that the kitchen was just about to close (like, within minutes of him calling) but that if we came right over we could order something. The walk was a little more than we thought it was going to be, but the food and Guinness were good.

There is a restaurant on site that has an incredible breakfast for a very reasonable price. It isn't associated with the campground and it closes at 5:00 pm, but you won't want to miss the breakfast! 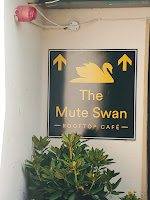 We wouldn't mind staying at this campground again, although it wouldn't be my first choice. I would prefer someplace a little more like a campground, but it was a good spot for being close to Killarney. There is a bus stop right across the street from the office, but we found it was faster to take a cab.  Derry, the owner, is another HUGE reason we'd stay there again. He went out of his way to call us cabs and to let us know what was in the area that we should see during the 1 day that we had there. Robert left his smartwatch in the shower stall and didn't realize it until the next day when we were 2 hours away. Derry sent it to our house in the USA and said it wasn't necessary to reimburse him (although Robert did).
This was a weird post, not the usual kind I write. I regret that we don't have pictures.
Follow along with more recaps and pictures on my personal blog: Life in a Small Town. (The link will take you to a list of the Ireland posts.)