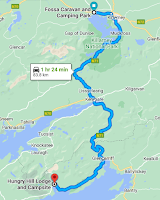 After a day in Killarney, we drove through Killarney National Park to get to Hungry Hill Lodge and Campsite. The views along the way were spectacular although some of the roads were a little nerve-racking for Robert.We planned to take this day to rest and do laundry. When we arrived, Jamie came out to greet us. She checked us in and showed us around. At that point, she said there would be one other couple in the campground but a young brother & sister from Germany ended up spending the night as well.
The campground is set against a mountain so it was perfect and made us feel at home. 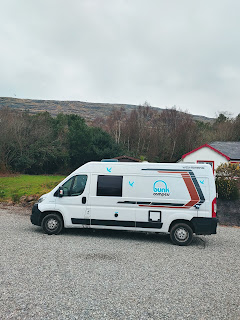 There is a store within walking distance. It had what we needed for the night but we had to go into Castletownbere for "real" groceries.
The campground has laundry facilities, free electricity, free Wi-Fi, and free showers. When we were there Daniel was in the process of fixing one of the sets of showers so there wasn't a separate shower/bathroom for each gender. There was a shower and toilet marked for guys and one for the ladies. The showers were hot and had plenty of pressure. Also on site is a kitchen. Let me just say that I love how every campground we went to had camp kitchens! I don't understand why we don't have them in the US. It just doesn't make sense.

Jamie and Daniel did everything to make us feel welcome and at home. Daniel's dog came out to meet us after we told him that we were dog lovers. He makes sure the dog is in the fence when campers come.
I had a little trouble with the dryer while doing laundry: my clothes weren't getting dry. It turns out that it was on the wrong setting and I didn't know I could change it. Jamie was kind enough to give me some of my money back.
Jamie also gave us a couple of recommendations on what to do during our day in the Beara Peninsula. We looked into taking a ferry over to Bere Island but then decided to just stay in Castletownbere. It appeared to be a really small town with not much to do, but after talking to Adrienne in MacCarthy's Pub, we found plenty to see. We drove out to Kilcatherine's Church to see a medieval church built on the ruins of a 7th-century monastery. The church itself is from the 11th or 12th century. The views were incredible.

We also found the ruins of Dunboy Castle, although we didn't know it at the time. It wasn't well-marked and we thought it was something else!

When we were in town we came across a parking lot that had signs allowing campervans to stay there overnight. That would have been a perfect place to stay if we were looking for someplace like that. We were hoping to find someplace like that in Wexford but didn't.
What's the verdict on staying at Hungry Hill again? You betcha. I loved the property it's on. There's also a lodge, tent camping areas, and "glamping" opportunities. Just about perfect!
Posted by Mary at 10:25:00 PM