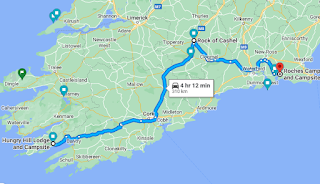 After we left Hungry Hill, we headed toward our last planned campsite: Roches Campervan and Campsite in County Wexford. We took a bit of a detour because when you're in that part of Ireland going to the Rock of Cashel is a must. We skipped Blarney Castle (too touristy & I've heard some nasty things about what happens on that rock at night!) knowing that the Rock was also touristy. As luck would have it, there was maintenance going on that day and we were able to park and get into the castle for free. As luck would have it, there were very few people there and no tour busses. (For more on our detour visit Life in a Small Town and click on County Tipperary.)
We stayed long enough to eat lunch at O'Neill's and walk through the castle, then we were back on the road. Along the way we passed the place where the cider we enjoyed is made. We didn't stop to see if they gave tours. It didn't look like they had a place open to the public, but I wonder if we would have been able to get a tour if we had stopped.
Roches Campground is right on Bannow Bay and is a working dairy farm. We paid half of our night's stay as a deposit online and were told we could pay the rest before we left the next morning. (Make sure you have cash!) As we arrived we were greeted with views of Bannow Bay over the field.
We almost had the place to ourselves; there was one other person sharing the concrete. Just across the bay, you can see where the Normans landed in 1169.
Since there were only 2 campers, the site was extremely quiet. The views were spectacular.
The campground is very clean and well-kept. Electricity is available at the site, but there is no wi-fi. There is a common area with a camp kitchen (of course...it's Ireland!) and really nice bathrooms.
In the picture below you can see the coffee trailer that is used during the high season. They also have live music during that time, but the owner had traditional Irish music playing over the speakers for us since we were there during the off-season. There are grassy pitches for tents. They offer pony rides on the beach and I'm sure the fishing is fantastic here. There is a shoreline path around the water but we didn't walk around too much the next morning because we had things to see that were recommended to us. Wellingtonbridge is a short drive away if you have the need for groceries or want to get a bite to eat.
The next day we headed to the Hook Peninsula. A lady I met in Clifden was from the area and told me to promise that we would see Tintern Abbey and the Hook Lighthouse. I told her the lighthouse was the reason we stopped here but I didn't know about the abbey. It turned out to be Robert's favorite castle/abbey of the trip.
We had some time before it opened so we strolled around a battlemented bridge and a church.

Both are things you won't want to miss. Seal and whale-watching are popular activities during certain times of the year.
*Sidenote: A man in the lighthouse gift shop told me that Carnavan Beach was a good place to park the van and spend the night. We didn't drive by and check it out so I can't confirm this.
We only stayed one night at Roches, although we talked about staying another one. I would love to go back during the high-season. Our plan was to hopefully find someplace to stop for the night in Wexford similar to what we saw in Castletownbere. After Tintern Abbey & the lighthouse, we decided to go ahead and start heading to Wexford. As I said in the post Camping in Ireland Without Reservations, we were disappointed at first. Every time something didn't seem to go as we hoped, something better happened.
For more information about what we did and saw in Ireland, visit Life in a Small Town.